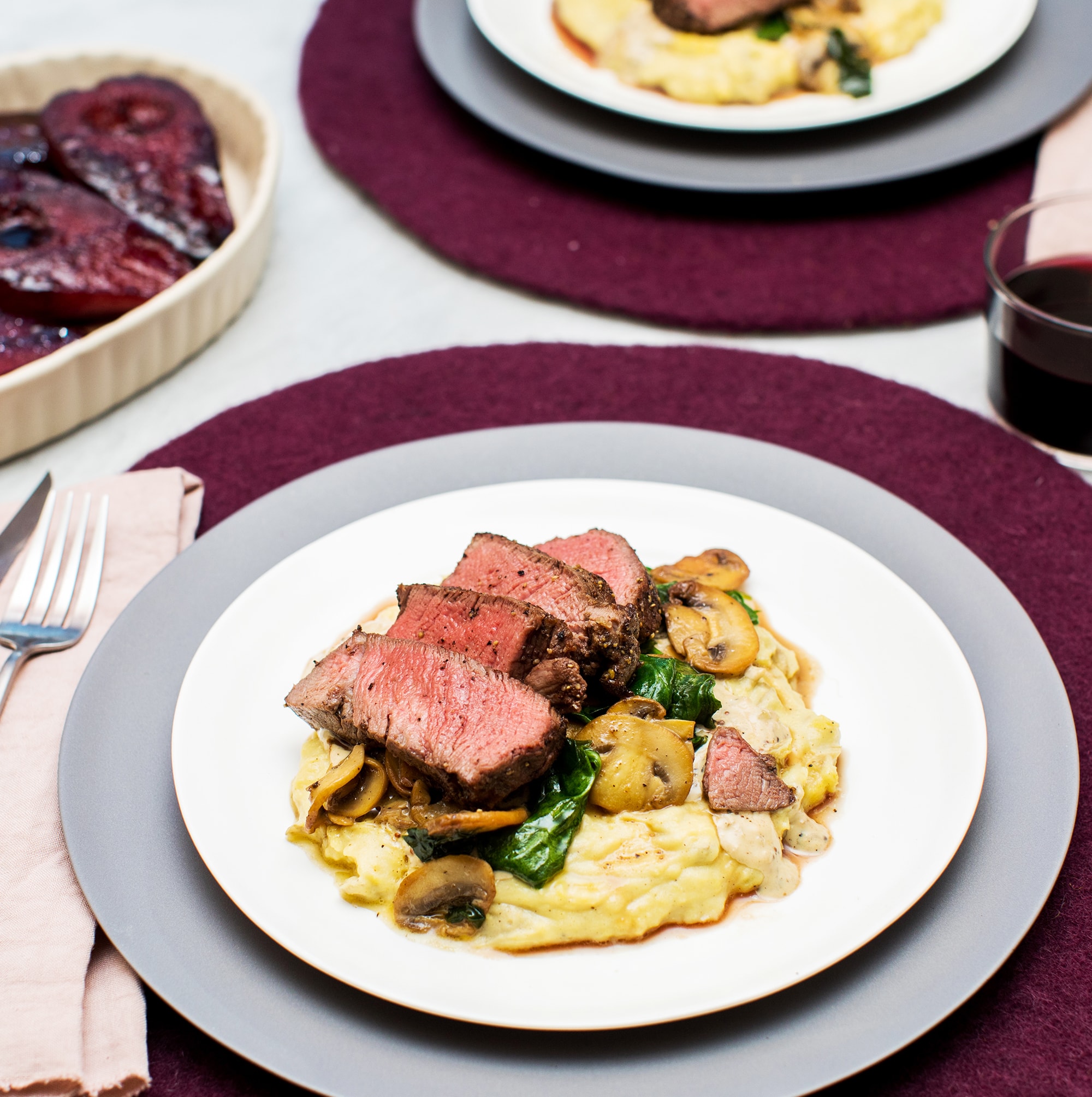 New Year’s Eve dinner is always my favorite meal of the year to cook because it allows me to fancy things up a bit and to indulge! This New Year’s Eve dinner for two is simply cooked filet mignon served on top of spinach and mushrooms along with brown-butter mashed potatoes. Dessert is a simple red wine poached pears. The pears can cook the as you prepare everything else, which makes it a perfect dessert option. They’re served with a dollop of orange-scented cream (not pictured), but the recipe for that is below as well! They’re delicious enough to eat on their own, but the cream takes it to another level!

Of course, you can serve this dinner for any special occasion, such as Valentine’s Day or an anniversary! This New Year’s Eve dinner for two will come together faster if you can have someone helping you control the couple of skillets you will need to cook the file mignon, but it is doable as a one-person operation so long as you prepare all your ingredients before starting.

INGREDIENTS FOR A NEW YEAR’S EVE DINNER FOR TWO

1 pound Yukon gold potatoes, skins on or off, depending on your preferences

1 cup red wine, such as Zinfandel or Shiraz

1/2 cup granulated sugar, more or less, depending on your taste

2-3 teaspoons powdered sugar, depending on how sweet you want the cream to be

Prepare Ingredients: Pat the filets dry and season liberally with salt and pepper. Chill, uncovered, in the fridge. Thinly slice the cremini mushrooms. Peel the pears, cut in half, and remove the seeds. Mince the shallot and garlic and keep together.

Cover the potatoes in a pot with cold, salted water. Bring the pot to a boil, cover, and cook for 20-25 minutes or until the potatoes are fork tender. Drain and transfer to a bowl and lightly mash with a fork to break them open.

While the potatoes are cooking, prepare the brown butter. Add the butter to a small saucepan and cook over moderate heat, stirring regularly until the butter turns a deep, golden color, about 7 minutes. Remove from heat and keep warm.

To the bowl of the potatoes add the milk, heavy cream, hot sauce (if using), and brown butter. Mix until smooth and creamy. Taste and season with salt and pepper. Cover and keep warm.

Add the heavy cream to a metal mixing bowl and beat with mixers until soft and creamy. Folk in the sugar, orange juice, orange zest, and vanilla, and beat for another 30 seconds or so until the mixture is thickened and soft peaks form. Cover and transfer to the fridge for up to 3 hours. Note: You may need to whisk the cream again prior to serving.

In a medium pot, combine the red wine, granulated sugar, ground cloves, ground cinnamon, vanilla, and lemon rind. Bring to a boil. Once boiling, add the pears and reduce heat to a low simmer. Cover and cook for 20 minutes. After 20 minutes, gently flip the pears and cook an additional 20 minutes. Note: Depending on how firm your pears are, you may need to increase the cooking time. The pears should be cooked until a fork can pass through easily. If you need to continue cooking, flip the pears occasionally.

Once the pears have finished cooking, gently transfer them to a serving platter. Discard the lemon rind in the pot. Bring the pot to a boil and cook for 3-4 minutes until the mixture is reduced and the sauce is thick and almost syrupy. Remove from heat and spoon the sauce over the pears. Keep warm.

Cook the Steak, Mushrooms, and Spinach

While the pears are cooking, prepare the steak. Note: You will need two skillets and a sheet pan for this part.

Preheat oven to 400ºF. Heat a tablespoon of vegetable oil in a skillet large enough for both filets over high heat until very hot. Add the filets and cook for 2 minutes per side until well seared all over. Transfer the filets to the sheet pan and transfer to the oven. Cook for 8 or 9 minutes or until desired temperature is reached. I cooked my filets for 9 minutes until they reached 120ºF. Remove the filets mignons from the oven and loosely cover with foil. Rest for 10 minutes before slicing.

In the second skillet, heat the one tablespoon of butter over medium high until melted and frothy. Add the mushrooms and cook until all the liquid has been released and evaporated and the mushrooms have turned golden brown, about 10 minutes. Season with salt and pepper. Add the 2 tablespoons of sherry and cook, stirring often, for 2 minutes until the alcohol has evaporated. Add the spinach and cover. Cook for 5 more minutes until wilted. Taste and season with salt and pepper.

In the skillet you cooked the filets in, turn the heat to medium. Add the minced shallot and garlic and cook until fragrant, about 30 seconds. Add the brandy or cognac and bring to a boil. Cook for 2-3 more minutes until the shallots have softened. Reduce heat and add the heavy cream. Cook for 5 more minutes or until thickened. Stir in the dijon mustard and whole grain mustard and stir to combine. Cook over low heat another minute or two before tasting and seasoning with salt and pepper.

To serve: Divide the warm potatoes between plates and spoon the creamy pan sauce on top. Arrange a few spoonfuls of the mushrooms and spinach on top of the potatoes and serve with the sliced filet mignon on top. For dessert, serve two pear halves in dessert bowls with a dollop of the orange-scented cream on top. Enjoy!