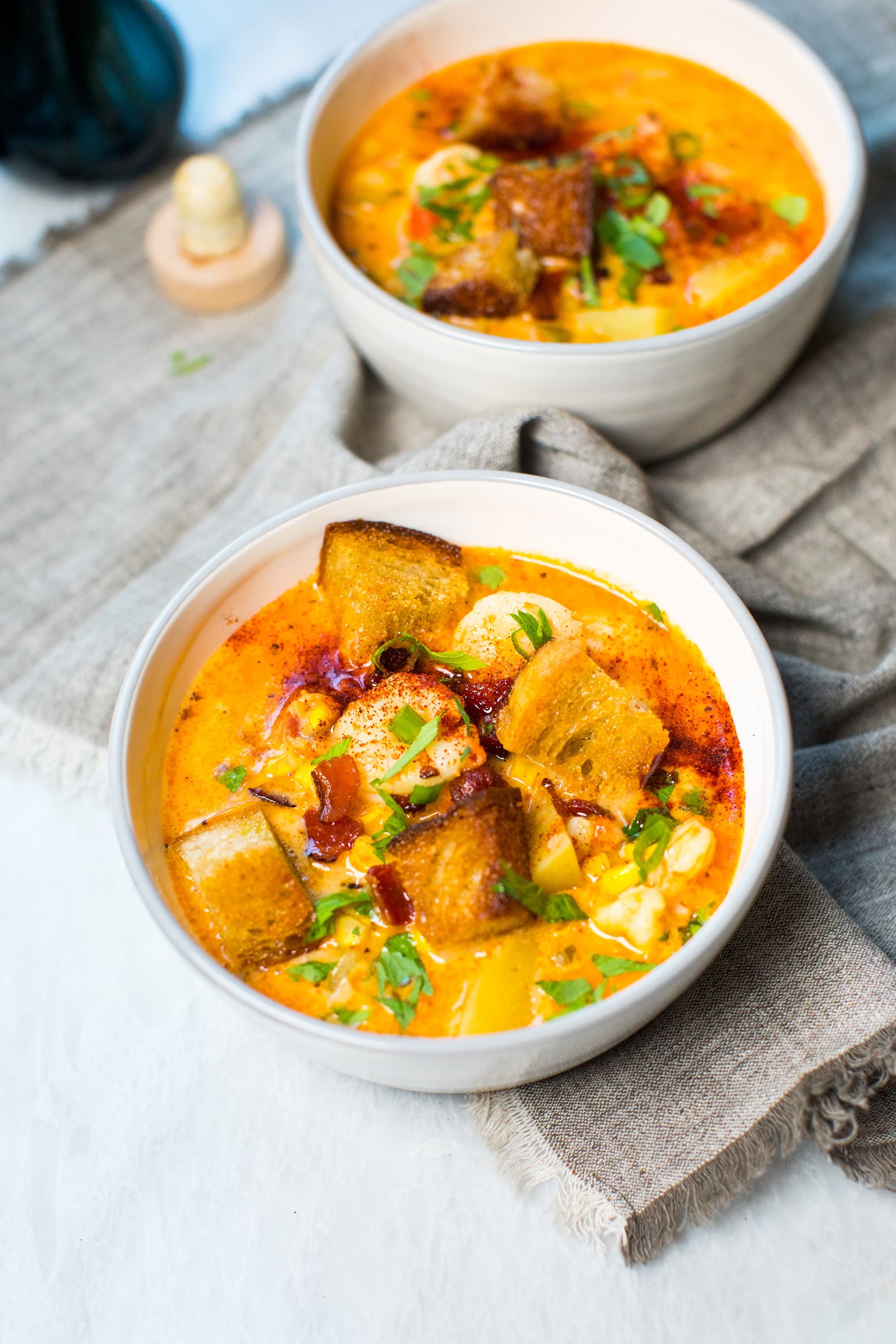 “Nothing like a bowl of hot shrimp corn chowder on a 100º day” is the first thing my husband said as he took a bite of this shrimp chowder. Although this shrimp corn chowder recipe may have been inappropriate given the weather, it was still worth it, in my opinion. As far as I am concerned, there’s nothing better than simple shrimp chowder – regardless of the temperatures outside. And this particular shrimp chowder is creamy, without being over-the-top decadent, and it is filled to the brim with loads of shrimp, corn, bacon, potatoes, and plenty of other tasty ingredients.

This simple shrimp corn chowder with bacon is garnished with buttery, toasted sourdough croutons and a sprinkle of paprika for an amazing shrimp chowder dish that is sure to impress.

Instead of going overboard with heavy cream, we decide to first prepare a roux and then add stock and white wine. Right before serving, we add a touch of heavy cream to add some additional richness.

First, Start the Chowder: Add the bacon to a large soup pot over medium heat and cook for 10-14 minutes until all the fat has rendered and the bacon is crispy. Use a slotted spoon to remove the bacon from the pot. Discard all but 2 tablespoons of the bacon fat from the pot.

Prepare the Roux: Add the celery and onion to the bacon fat and turn the heat to medium high. Cook, stirring regularly, until softened and beginning to brown, about 6-8 minutes. Add the garlic and white parts of the scallions. Cook for 45 seconds more. Add the flour and stir to combine. Once bubbly and browned, begin incorporating the stock in small additions, whisking after each addition in order to keep the flour from lumping up. Continue whisking until all the stock has been added. Add the white wine and bring to a boil. Stir in the paprika, garlic powder, and cayenne powder along with salt and pepper. Taste and adjust the seasonings as necessary. Reduce heat low.

Cook the Vegetables: Add the potatoes, corn, all but a pinch of the cooked bacon, and tomatoes to the soup and cook for 25-30 minutes or until fork tender. Taste and season to your preferences.

Prepare the Sourdough Croutons: Preheat oven to 350ºF. Melt the butter in an oven-proof skillet over medium heat. Add the oil and then add the croutons. Cook for 1 minute before seasoning with salt and pepper. Transfer to the oven and bake for 6-8 minutes until toasted and browned.

Cook the Shrimp: While the croutons are toasting, finish the chowder. Stir in the shrimp along with the heavy cream and cook for 5-7 minutes until the shrimp are cooked through. Remove from heat.

To Serve: Divide the shrimp chowder between bowls and garnish with reserved bacon, croutons, a sprinkle of paprika, and the reserved scallions and minced celery leaves. Enjoy!