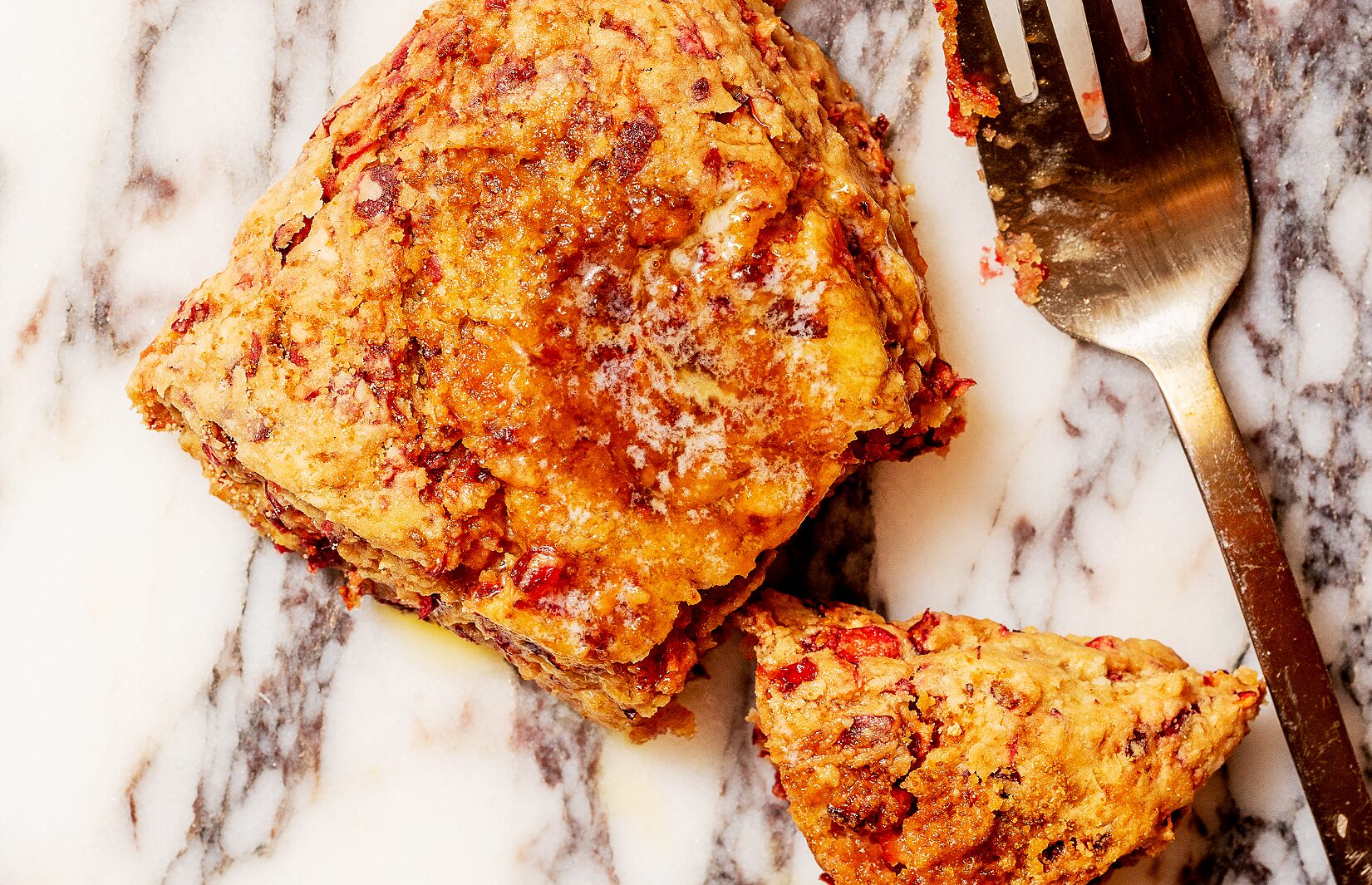 While I love writing and sharing recipes, the writing I do for each post becomes less about creativity and more about plugging and stuffing keywords to force Google to find my post.

But, I still want to create a space where I can explore a more free-form approach to my writing than what I do in my regular posts. I also want to have a space where I can experiment with food, recipes—specifically OTHER peoples’ recipes—and new ideas. I also want to share my failures. To my credit, I think I’ve made Tried & True a place that feels very polished, but that finesse also makes my site feel devoid of personality.

So, what’s the point of this feature?

And specifically, what does Sunday Scones even mean? Am I gonna just post scones every Sunday? No, but last Sunday, I made scones for the first time, and I thought to myself, “huh…this is nice to make someone else’s recipe for once!” It was an experience that had absolutely no pressure. I tried a new recipe without the pressure of writing SEO content, trying to make it go viral, and feeling like it had to turn out perfect because I can’t share it otherwise, which means the whole thing was a big waste of time. Removing that pressure of perfection made my time in the kitchen so much more enjoyable.

For me, Sunday Scones will be synonymous with Sunday Experimentation, Sunday No-Pressure Cooking, Sunday Anti-Perfectionism.

But, I also made my very first McMuffin! Well, okay, not technically a McMuffin because it didn’t have the circular egg patty thing.

And here’s how it turned out:

I am really proud of how this turned out; it was delicious and exactly what I needed on a Sunday. I was actually super close to stepping into McDonald’s after a close to 4-year hiatus, but I remembered I had some English muffins in my freezer. To be perfectly candid with you…I didn’t even attempt to follow a McMuffin dupe recipe. But it has egg, it has cheese, it has an English muffin…therefore, it’s an Egg & Cheese McMuffin, and you can’t tell me otherwise.

To make it, I just baked frozen English muffins at 350ºF until I could pull them apart. I separated each muffin and sprinkled each half with shredded sharp cheddar and shredded mozzarella. I like cheese on the top and bottom half of the muffin, so sue me. Then, I popped the muffins back in the oven until the cheese melted.

Then, I fried an egg in butter until the whites set, and then I flipped it. I cooked the yolk another minute or two for a sort of over-medium fried egg vibe. I tried to tuck in the whites as much as possible, so they weren’t flopping over the sides of the muffin. Then, I put the egg on top of one of the muffin halves and added a few splashes of Melinda’s Hot Sauce. I have been obsessed with Melinda’s original habanero hot sauce for the past 5 years. I use it on everything. Then I just squashed the muffin together and cut it in half for the sexy cross-section you see above.

Now: on to the great scone debate!

Well, it’s less of a debate and more of a look at two different scone recipes. Like I mentioned above, last Sunday was the first time I’d ever made scones. I called my dad tonight to tell him about this new Sunday Scones feature—and since I’m very much on my high and mighty scone horse—I asked him if he’s ever made scones before. He said “Yeah, and you guys always made fun of me for them!” I definitely do NOT remember making fun of his scones, but clearly I had a very different opinion of them back in the day than what I have now.

I don’t know what sparked the idea that I had to learn how to make scones and I had to learn it NOW. I think it’s because I had a bag of fresh cranberries in my fridge and I thought cranberry scones would delicious, which leads me to the recipes.

The recipes I used:

The first recipe is The Kitchn’s Fresh Cranberry Scones. At the time, I was just happy (read: relieved) that they weren’t a total disaster. But comparing them against King Arthur Scones Recipe I made today does make me see some issues with my first batch.

The Kitchn’s recipe resulted in super dense, dry, dark scones. They spread out A LOT while they baked and they definitely didn’t rise very much. They were good upon the first taste; I liked the intensity of the fresh cranberries, but once they cooled off, it was like eating a brick.

Every time I ate one, it was like, “these scones are making me thirsty.”

I had to have some milk to make them go down a bit easier. I also thought the recipe was much fussier than the King Arthur scones. Breaking out the food processor, turning everything onto my counter, kneading it, forming it into a giant ball, then cutting; it was just a bit of a hassle. The scones were HUGE, which is maybe why they were so dense. As I said, I did like the intensity of the fresh cranberries and the addition of the orange zest, but ultimately, I didn’t like the heaviness of them.

The King Arthur scones win this imaginary competition, no question.

Here’s what I liked:

The technique was perfect. They were so easy to make, and they were indeed fluffy, light, and just so tasty. They tasted very close to the scones I’ve had in bakeries.

They STUCK! Now, it could be because I used a crappy roasting pan that I inherited from the previous homeowner…and by inherited, I mean I found it under the stove covered in cobwebs and decided to keep it (don’t worry, I ran it through the dishwasher first, I promise). King Arthur said if you didn’t have parchment, you could just sprinkle flour on the baking sheet (or the weird roasting pan you find under the stove when you first move in). And the recipe explicitly stated NOT to grease the pan if you don’t have parchment. That was a mistake. They stuck. But I used my stainless steel turner, and after a few big pushes, I got them all up with minimal damage.

All that to say, I’m really happy I tried something new. I learned that freezing scones before baking is a must and that homemade McMuffins are definitely worth the effort, even if you don’t make the iconic egg patty thing.

That concludes the inaugural Sunday Scones post, and I hope you enjoyed it. I definitely am thinking forward to more anti-perfectionism Sundays in the future.

If you have suggestions for what I should try in the next edition of Sunday Scones, let me know in the comments! I’d love some new ideas.

Hope you all have a wonderful week, and be sure to check out some of my newest recipes!