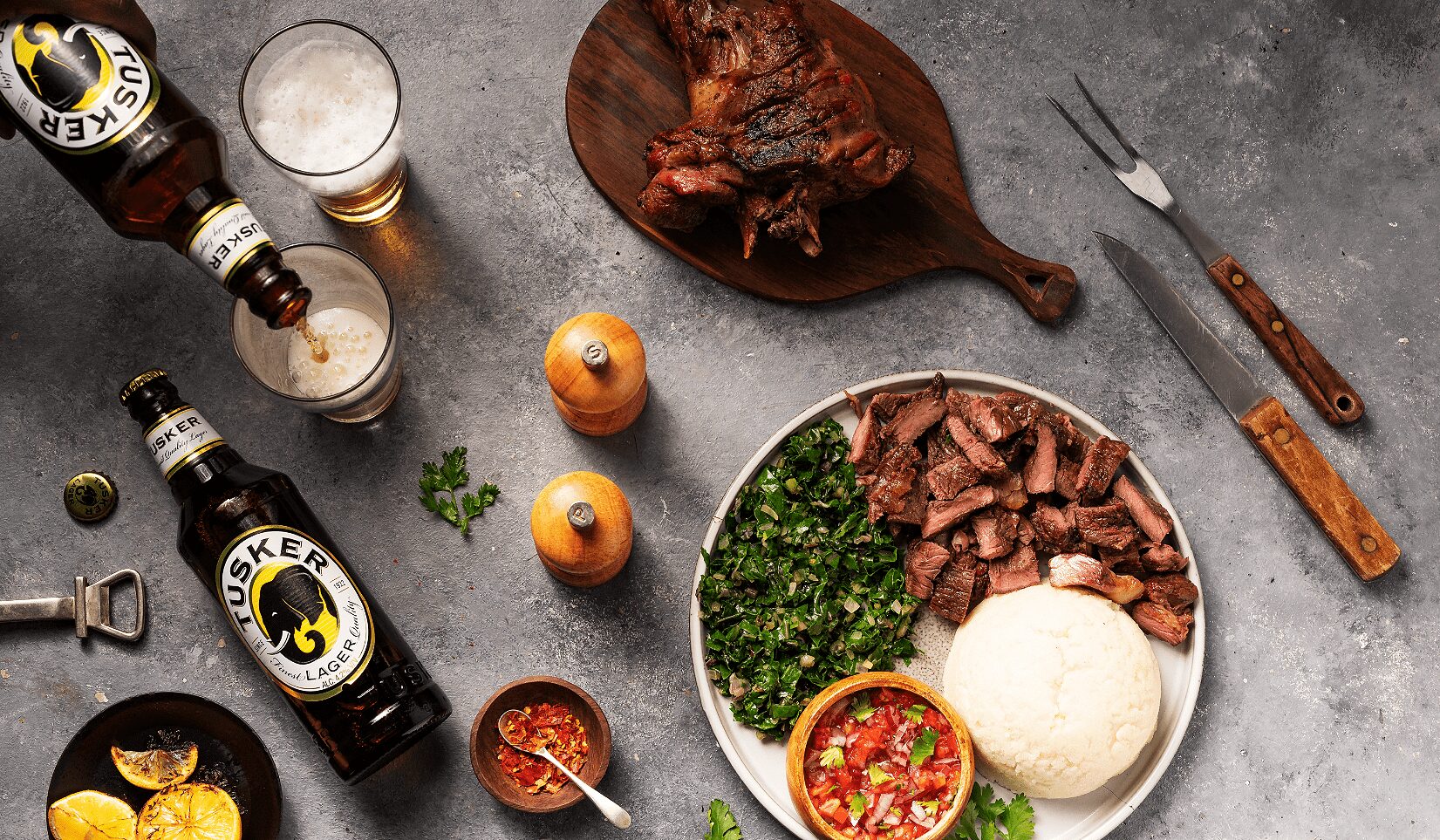 Kenya is known for its talented long-distance runners (Eliud Kipchoge, anyone?) and rich wildlife heritage, but did you know it’s home to some of East Africa’s most diverse dishes?

The country’s cuisine is influenced by its 42 distinct tribes as well as its Asian and Arabic communities. As a melting pot of different cultures, Kenya has a wide range of flavorful dishes to offer that can be enjoyed by Kenyans and non-Kenyans alike. Ugali and nyama choma (roasted meat) is one of those dishes.

It’s usually eaten as a casual meal with friends and downed with a couple of beers. It’s served with kachumbari, a tomato and onion salad, to top it off.

Ugali is a meal made by stirring maize flour into boiling water. The process is akin to making porridge, except the flour is stirred until it stiffens.

Taste-wise, ugali has mixed reviews. While some describe it as having a mild popcorn-like taste, to others, it has no distinguishable taste. You can add flavor to it by adding salt or butter to the boiling water or substituting water for milk. Nonetheless, it’s best enjoyed simply with maize flour and water.

The name ugali is a Bantu language term derived from Swahili. However, it’s eaten throughout Africa in different variations, with each community having a name for it. It’s known as pap or mielie pap in South Africa; fufu in Sierra Leone; akamu or ogi in Nigeria; and shishima in Zambia.

In Kenya, it is a prominent dish in the Luhya tribe known as obhusuma and can also be made from sorghum or millet flour. In the Kikuyu tribe, it goes by the name ngima.

Sorghum and millet were primarily used to make ugali before the introduction of maize in Kenya by Portuguese traders in the 19th century. Due to its high yield potential, British settlers undertook large-scale farming of the crop for export but soon began giving it to their workers as payment, which is how locals started eating it.

Hammer mills were soon introduced in the 1920s, making maize-milling faster and cheaper as millet and sorghum needed to be dehulled first. Soon after, the introduction of industrial processors further refined the grain and gave it a longer shelf life, leading to maize flour becoming a staple in Kenya.

Nyama choma is a Swahili word that directly translates to burnt meat (i.e., grilled meat or roast meat). It is primarily made from goat meat, although other meats can be used. It’s a dish synonymous with celebrations and special occasions, like weddings, graduations, birthdays, or weekends out with friends and family.

Nyama choma originated from nomadic tribes, notably the Maasai. They are the most famed tribe in Kenya and serve as cultural ambassadors for Kenyan tourism. Their unique cultural practices, iconic attire, and reputation for hunting lions make them the most iconic ethnic group in Kenya.

They place a high value on livestock and are known for living among wildlife. Migrating with their large herds, the Maasai are traditionally known for eating meat and drinking milk mixed with cattle blood.

They’d grill the flesh and ribs of cows and goats over charcoal while migrating. The practice of grilling goat meat soon spread to other cultures in Kenya and evolved into what it is today.

Kachumbari is a Swahili word that originates from the Indian word kachumber—a salad dish consisting of fresh tomatoes, onions, cucumbers, lemon juice, and chili peppers. The simplified version of kachumbari consists of fresh tomatoes and onions and is popular in parts of Eastern and Southern Africa. Optional ingredients include coriander, parsley, and avocado.