Whether you’re team mashed potato or team potato gratin, this easy mushroom and potato leek gratin recipe is a Thanksgiving potato recipe everyone will love.

If you’re looking for an exquisite Thanksgiving potato recipe, you’ve come to the right spot. This mushroom and potato gratin recipe is aromatic, earthy, and oh so creamy and rich.

Normally, I’d place myself squarely on the team mashed potato side of the imaginary line. I’ve always found mashed potatoes to be completely unassailable. However, this potato leek gratin recipe really has me questioning my alliance.

The only downside to gratin? The prepwork! But the finished dish looks beautiful, tastes delicious, and is worth the extra work as far as I’m concerned!

How to make this mushroom and potato leek gratin recipe:

First, start with large, golden potatoes. You can peel them, but I prefer to the leave the skin on the potatoes. Use a mandoline (preferred) or food processor with slicing attachment or a very sharp knife and slice the potatoes into 1/8” slices. The mandoline is the fastest way to achieve this, so if you don’t have one I recommend picking one up! It’s a really versatile tool that can be used for so many things! Keep the potatoes in water to prevent them from browning.

Next, cook the mushroom and leeks. Simply sauté both in butter until the mushrooms release their liquid and the liquid evaporates and they turn golden brown. Be careful not to burn the leeks! Transfer to a bowl.

In the same pot, add more butter and a tablespoon of flour. Cook until the flower is nutty and aromatic, about 2 minutes. Slowly whisk in heavy cream, about a quarter cup at a time, until smooth and thick. Simmer for 5–7 minutes until thickened. The secret to this cream sauce? Nutmeg and white pepper. Don’t skip on them! They add just slightly sweet, lightly spiced, and very aromatic undertone to the gratin.

How to assemble the gratin:

Depending on the size and dimensions of your baking dish, you may have more layers or fewer layers. It really does not matter how you arrange the mushrooms, but you want a layer or two of mushrooms in the middle of the casserole and you want enough remaining to scatter on the top, so as long as you keep that in mind, you should be good!

While the casserole bakes, prepare the homemade breadcrumbs and scatter them on top. Broil for 1–2 minutes until golden brown.

Let stand for 10–15 minutes before serving.

Looking for more Thanksgiving side dish recipes? Check my archives!

If you made this recipe, please rate it and comment below! You can also follow me and share your creations by tagging me! I’d love to feature your #triedandtruerecipes creation on my feed. 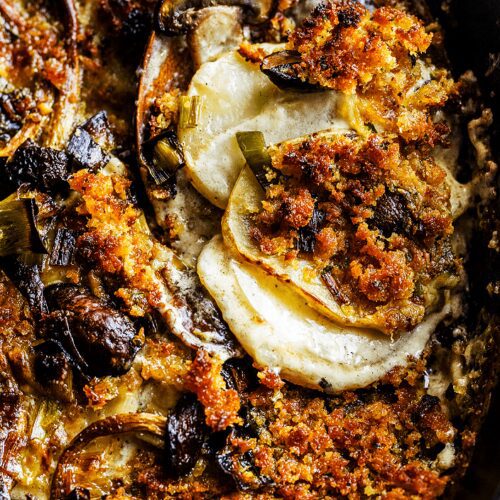 Cook the mushrooms and leeks: