This vegan rice noodle soup is inspired by flavors of traditional phở thanks to cinnamon, clove, and star anise. You’ll love this rich vegan soup recipe.

This recipe is not an authentic phở recipe, though it is a nod to the rich, aromatic flavors of phở. It’s completely vegan, though the broth is still bursting with flavor.

When I order phở, I typically go for beef phở or bún bò huế. This vegan noodle soup recipe is a nod to the flavors found in those soups: star anise, lemongrass, and cloves. I’ve found when I try to create a vegan version of a meat dish, the hardest part is getting the richness. The depth of flavor that comes from roasting bones or the fattiness from the meat can be hard to achieve in a meat-free dish.

Fortunately, this broth–thanks to ample spices and lots of aromatics–is anything but thin or dull. One big key to this soup broth is charring the aromatics before adding the water. The smokiness will add complexity to the broth flavor.

How to make a good, rich vegan soup broth:

First, the fresh aromatics. In this recipe, you’ll use:

As you can see in the photo, I don’t bother peeling any of the aromatics because there’s really no need to. The paper from the shallot will add a darker color to the broth. Since you’re discarding all the solids anyway, save yourself the trouble of peeling. For the lemongrass and ginger, you do want to smash them lightly with the back of your knife to help release all the flavor more quickly.

For the dry aromatics, you use:

In this case, I used pink peppercorns but you can try this with black or even green peppercorns to play with the flavor profile.

To prepare the broth, start by searing the fresh aromatics until they begin to develop a char. Pour in water and bring to a boil. Then in a dry skillet, add the cinnamon, star anise, cloves, and peppercorns and cook on high heat for 1 minute until very fragrant. Pour the dry aromatics into the boiling broth (and enjoy that amazing sizzling and popping sound!). Add a big pinch of brown sugar and then simmer for 45 minutes. The longer it simmers the better!

From there, strain the broth into a large bowl through a sieve and discard the solids.

How to make the soup:

Once your broth is strained, prepare the soup. Wipe out the pot used for the stock and sauté sliced onion and then add some sliced mushrooms. I used a mix of shiitake and cremini, though you can use whatever mushrooms you like best!

Pour in the reserved broth and bring to a boil. Simmer as you finish the rest of the soup.

Cook the noodles and then divide them into bowls. I used the same skillet I used for the aromatics to crisp up some oyster mushrooms for textural contrast. And once that’s ready, get your garnishes ready. You can stick with traditional phở toppings, like:

I used what I had on hand, which was:

Of course, you should get creative with the toppings and use what you like best! You could even try it with thinly sliced daikon radish and carrots, too!

If you made this vegan rice noodle soup recipe, please rate the recipe below and leave a comment to tell me how you liked it! If you take a picture of it, please tag me on Instagram so I can feature you in my feed! 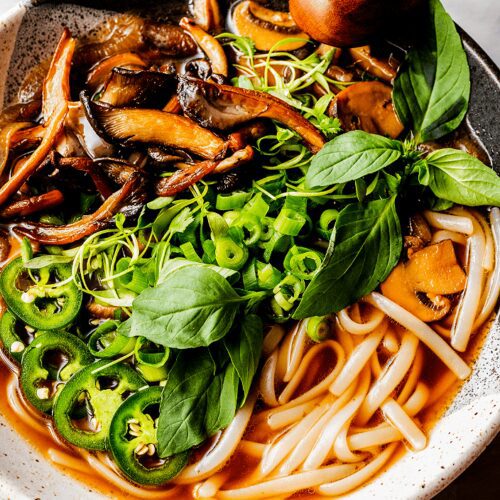