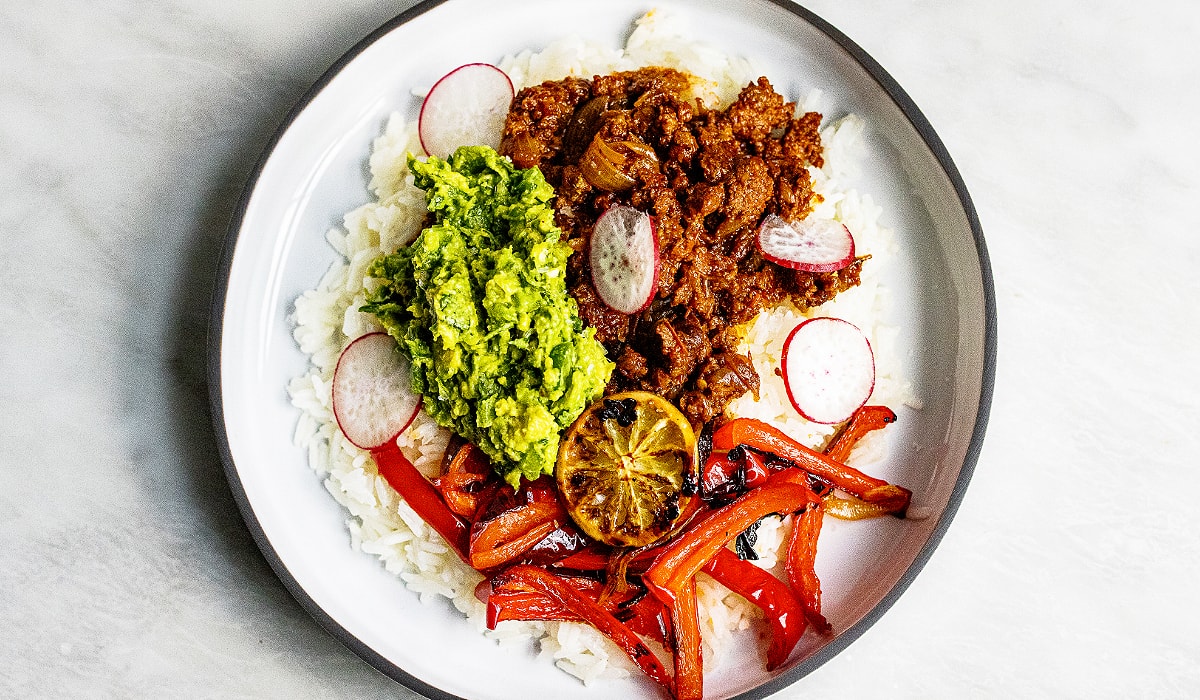 Where do we start with this chorizo burrito bowl and charred lime? This spicy chorizo bowl is everything you could possibly want for dinner.

Chorizo burrito bowl. Is there anything more delicious? Make this dream weeknight dinner and your whole family will thank you. A variety of flavors, from spicy stewed chorizo to the fragrant charred limes make this meal absolutely delicious.

The best part of cooking with chorizo? You can use the leftover chorizo fat for other recipes. Seriously. Don’t throw away the grasa de chorizo aka liquid gold! If your chorizo isn’t terribly fatty, leave the liquid gold in the pot. If it is quite fatty, strain it off and use it for something else. Chorizo fat fried hash browns, anyone?

How to Make this Chorizo Burrito Bowl with Charred Lime:

You won’t struggle making this chorizo burrito bowl recipe. Everything more or less comes together while the chorizo stews on the stove. You will use a few pots and pans, however. You need a wide pot for the chorizo, a small pot for the rice, a sheet pan, and a food processor. If you do not have a food processor, simply mince the jalapeño and shallot and halve the tomatoes and cook them in with the chorizo.

First, prepare the chorizo. Heat a tiny, tiny bit of oil in a wide pot and add the chorizo. Break it up with a spoon as it cooks. Next, add an onion and let it cook for about 8-10 minutes until the onion is softened and the chorizo is mostly cooked through. Add a can of sliced hatch chili peppers.

While the chorizo cooks, turn on the broiler. Broil a shallot, 1-2 jalapeño peppers, and a pint of cherry tomatoes until charred. Transfer them to a food processor and pulse until minced. Add it to the chorizo along with a cup of water. Let it simmer for about 30 minutes.

While the chorizo simmers, you can get everything else done. Roast the red peppers, shallot, and lime. Cook the rice. Prepare the avocado. You’ll use one of the charred limes in the mashed avocado! From there, it’s just a matter or serving it up!

Where do we start with this chorizo burrito bowl and charred lime? This spicy chorizo bowl is everything you could possibly want for dinner.
5 from 1 vote
Print Pin
Prep Time: 10 minutes
Cook Time: 50 minutes
Total Time: 1 hour
Servings: 4
Calories: 684kcal