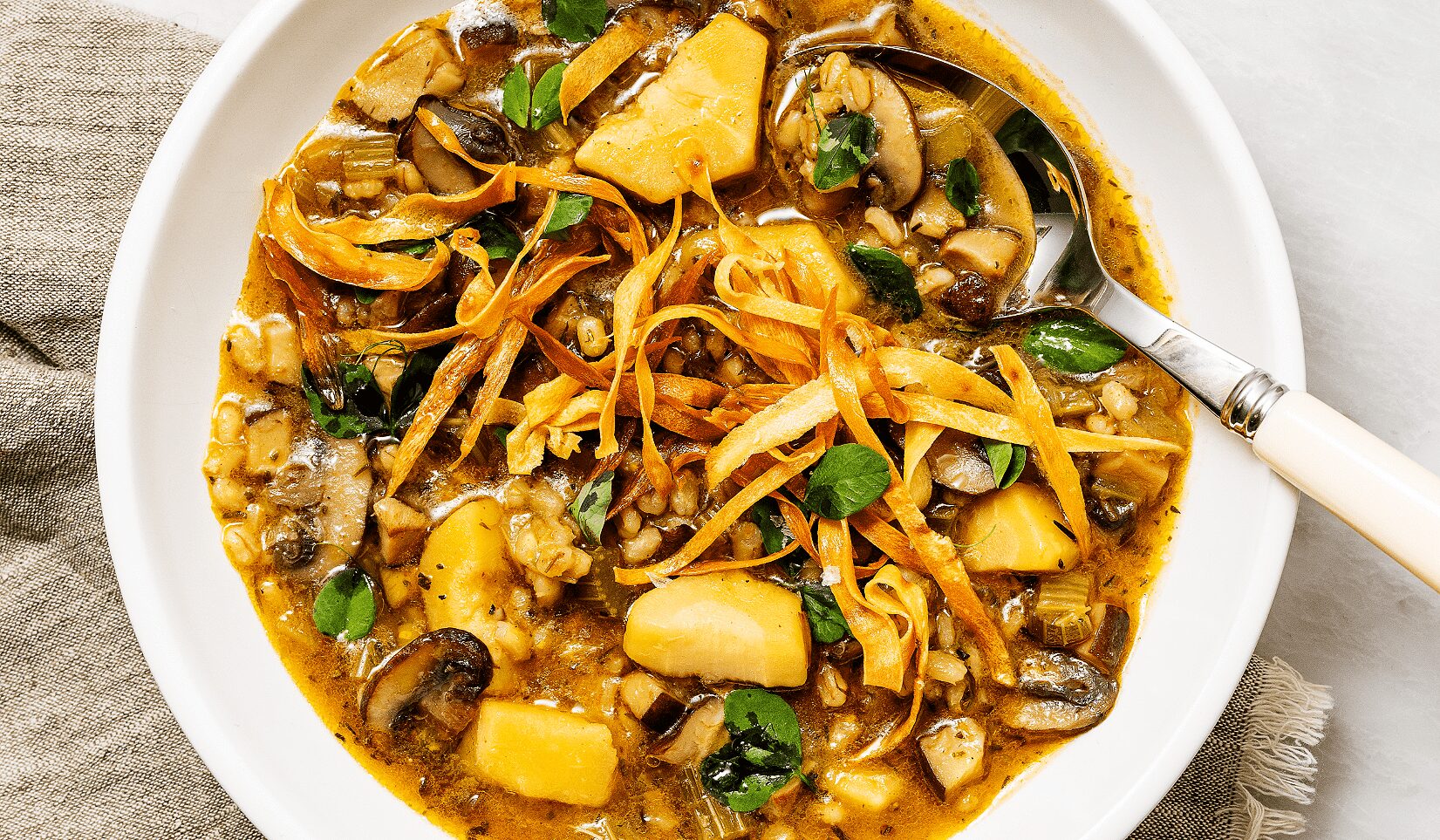 This vegan mushroom-barley stew with parsnips makes the most of the lightly spicy flavor of parsnips. First, by adding them to the stew and then by transforming them into a crispy parsnip topping. This mushroom barley stew recipe will be your go-to autumn recipe.

I’ve been hard at work on my 5-ingredient cookbook, which, thankfully, the ingredients don’t include water, salt, pepper, or oil. It’s been SUPER challenging coming up with ways to make 5 ingredients exciting.

Last night, I mulled around the idea of developing a vegan mushroom barley stew recipe. Since I had parsnips, I wanted to include them as a vegetable. I didn’t want to rely on them solely as a stew ingredient. Instead, I wanted to find a way to incorporate them as a garnish as well.

That’s when it hit me: crispy parsnips!

I imagined the parsnips as thin, shoestring fries. To be extra crispy, they shouldn’t be too thick which meant finding a way to get paper-thin sheets. I used a vegetable peeler to shave the parsnip into sheets. A mandolin or julienne peeler would work too. Then I sliced those sheets into matchsticks.

From there, I threw the parsnip matchsticks into hot oil. The result? A garnish that’s crunchier than potato chips with the a lightly spicy flavor.

How to make the vegan mushroom-barley stew with parsnips:

The stew itself is unbelievably easy to make. It just has the following ingredients:

For the mushrooms, I recommend using a variety of mixed mushrooms. Try slicing half and then dicing the remaining half to create some textural contrast.

To make the stew, simply sauté the mushrooms in batches and then add the celery, thyme, and barley. Add lots of salt and pepper and water. Bring it to a boil and then reduce heat and simmer until the barley is tender.

Ladle the cooked stew into bowls and garnish with the crispy parsnips. It’s really a perfect autumn meal!

Looking for more vegan recipes? Be sure to check my archives or follow my vegan recipe blog, Exploring Vegan!

This vegan mushroom-barley stew with parsnips makes the most of the lightly spicy flavor of parsnips. First, by adding them to the stew and then by transforming them into a crispy parsnip topping.
5 from 2 votes
Print Pin
Prep Time: 15 minutes
Cook Time: 1 hour
Total Time: 1 hour 15 minutes
Servings: 4
Calories: 302kcal

If you don’t have a thermometer, check the temperature of the oil by placing the end of a wooden spoon of chopstick into the oil. If it bubbles steadily, it’s ready. If it is bubbly vigorously, the oil is too hot. Turn the heat down and let the oil cool off for a minute. If there are no bubbles, allow the oil to continue heating.