This spinach-scallion coconut udon recipe is creamy and so easy to make. It’s loaded with spinach, scallions, potato, and coconut milk for a rich, vegan coconut broth.

As I near the end of my cookbook testing, I’m finding myself scraping the bottom of the idea barrel. It can feel frustrating, and I begin to think that there are simply no more ideas left in me.

That’s why it’s such a pleasant surprise when a recipe as beautiful as this one pops out of nowhere. I had an idea for a coconut udon recipe. I knew I wanted it to be green. Green broths and soups can be difficult to get right. If you go too far with browning the vegetables or with steaming the spinach, you’ll end with mud. It’ll taste delicious, but it’ll lack that beautiful, bright, spring-green color.

That’s the key to this coconut udon recipe. Keep the heat moderate–not too hot–and be careful not to overcook any of the key ingredients, specifically the scallions and spinach. You want to retain as much of the green color as possible in order to have a beautiful finished dish.

How to make this spinach-scallion coconut udon:

This udon is super easy to make. You’ll want a food processor or blender or immersion blender so you can blitz the broth into a creamy, smooth texture.

First, start the broth by sautéing chopped scallions over moderate heat. You want to sweat and soften them, but you don’t want to brown them. Be mindful of the heat and flip them regularly. Next, add a peeled, chopped potato. This will add a bit of substance and thickness to the broth. From there, pour in water or vegetable stock and bring to a boil. Once the potato is fork-tender, add the spinach and let it cook until just wilted and bright green. Immediately turn off the heat and let it cool for 5–10 minutes.

From there, blend the broth until very smooth and then add the coconut milk and blend again.

To finish it up, ladle the cooked broth into shallow bowls and pile the udon on top. Garnish with black sesame seeds, a drizzle of sesame oil, and thinly sliced scallion greens.

Looking for more vegan recipes? Make sure you check out my vegan blog, Exploring Vegan! 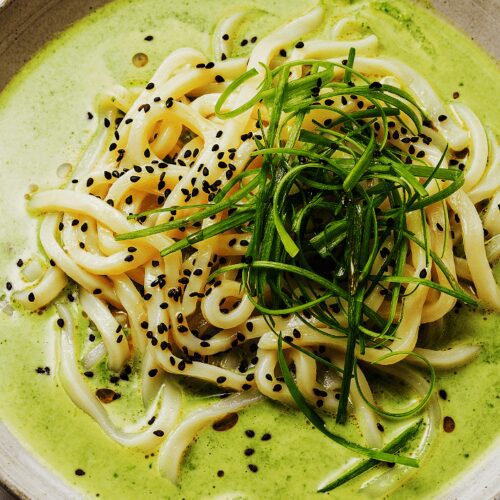