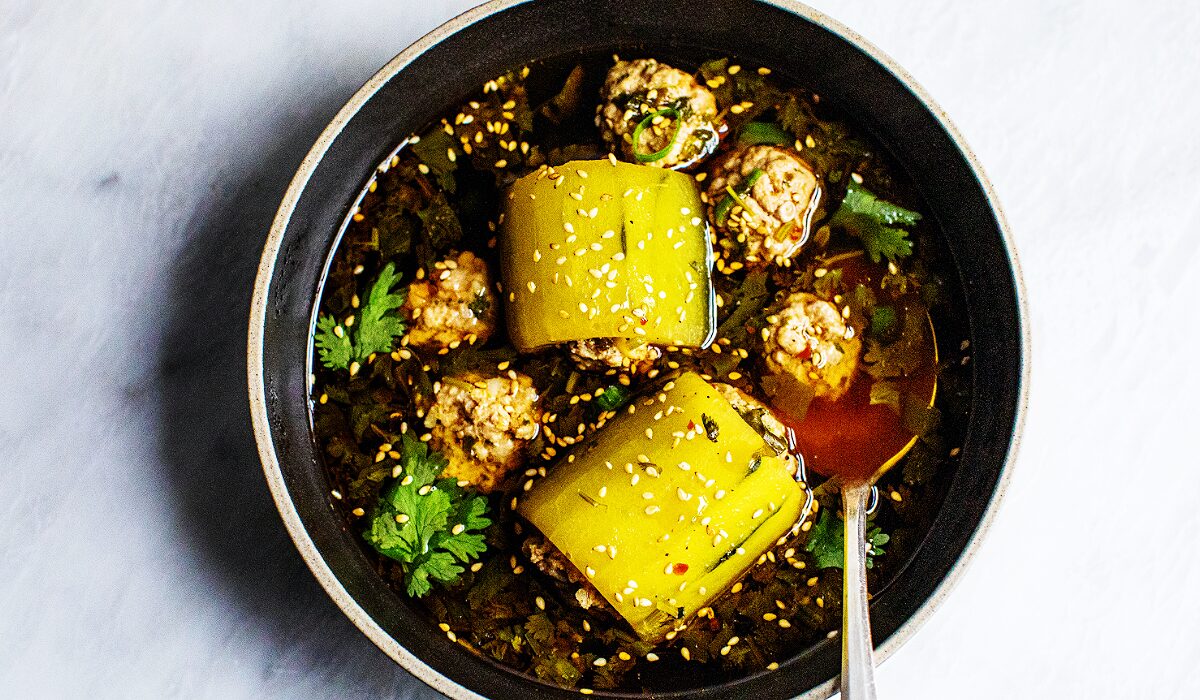 Someone told me about Chrissy Teigan’s Thai pork stuffed cucumber soup and I knew I wanted to try making my own version of it.

I did a little hunting and found a version on Cookpad by Kanya from Thailand. Her version uses lots of cilantro and also adds tofu, which I didn’t have, so I omitted that. But, I wanted to try a version similar to what she had growing up, so I used Kanya’s recipe as a starting point for exploration.

I did take her suggestion of white pepper in the ground pork and a healthy amount of cilantro stems in the broth and in the pork. The only other changes I made to this pork and cucumber soup included adding a bit of spice to both the pork and the soup broth. You can do this with either sambal oolek, sriracha, a bit of chili oil, or even just plain old crushed red pepper. I would have liked to have used minced up Thai chili peppers, but didn’t have any so I used sriracha.

How to make this Thai Pork Stuffed Cucumber Soup:

This pork cucumber soup recipe is ridiculously easy to make and honestly, you’ll spend the most amount of time hallowing out the cucumbers. In my recipe, I use about half the pork in two large cucumbers and the remaining half as itty bitty meatballs in the soup.

First, let’s get the broth going. I was amazed at how simple and flavorful the broth is. Simply combine water with sesame oil, soy sauce, pepper, sriracha, and one bunch minced cilantro stems. Combine everything in a pot and bring to a boil. reduce

While the broth is simmering, you’ll prep the cucumbers. Peel them and cut into three or four pieces depending on how long they are. Using the back of a teaspoon, scoop out the seeds and discard them.

The last major step is just making the pork. Combine the ground pork with minced cilantro, minced garlic, sriracha, soy sauce, and a bit of sesame oil. Carefully stuff the hallowed out cucumbers with the pork mixture. Roll any remaining pork into meatballs.

The last step is just tossing everything in the pot and letting it simmer vigorously for about 20 minutes. You don’t want to boil it too hard – just a hard simmer will do.

Finally, serve it up! Ladle everything into bowls and garnish with more cilantro and a minced green onion. Someone told me about Chrissy Teigan's Thai pork stuffed cucumber soup and I knew I wanted to try making my own version of it.
4.60 from 5 votes
Print Pin
Prep Time: 25 minutes
Cook Time: 25 minutes
Total Time: 50 minutes
Servings: 4
Calories: 356kcal

In this recipe, you can use 1 small bunch of cilantro. Cut the cilantro right beneath where the bunch becomes leafy and mince the stems. Use about 1/4 cup of the leaves for the meatballs and use any remaining cilantro as garnish. If you have a very large bunch,  just use discretion on how much cilantro you want to use!