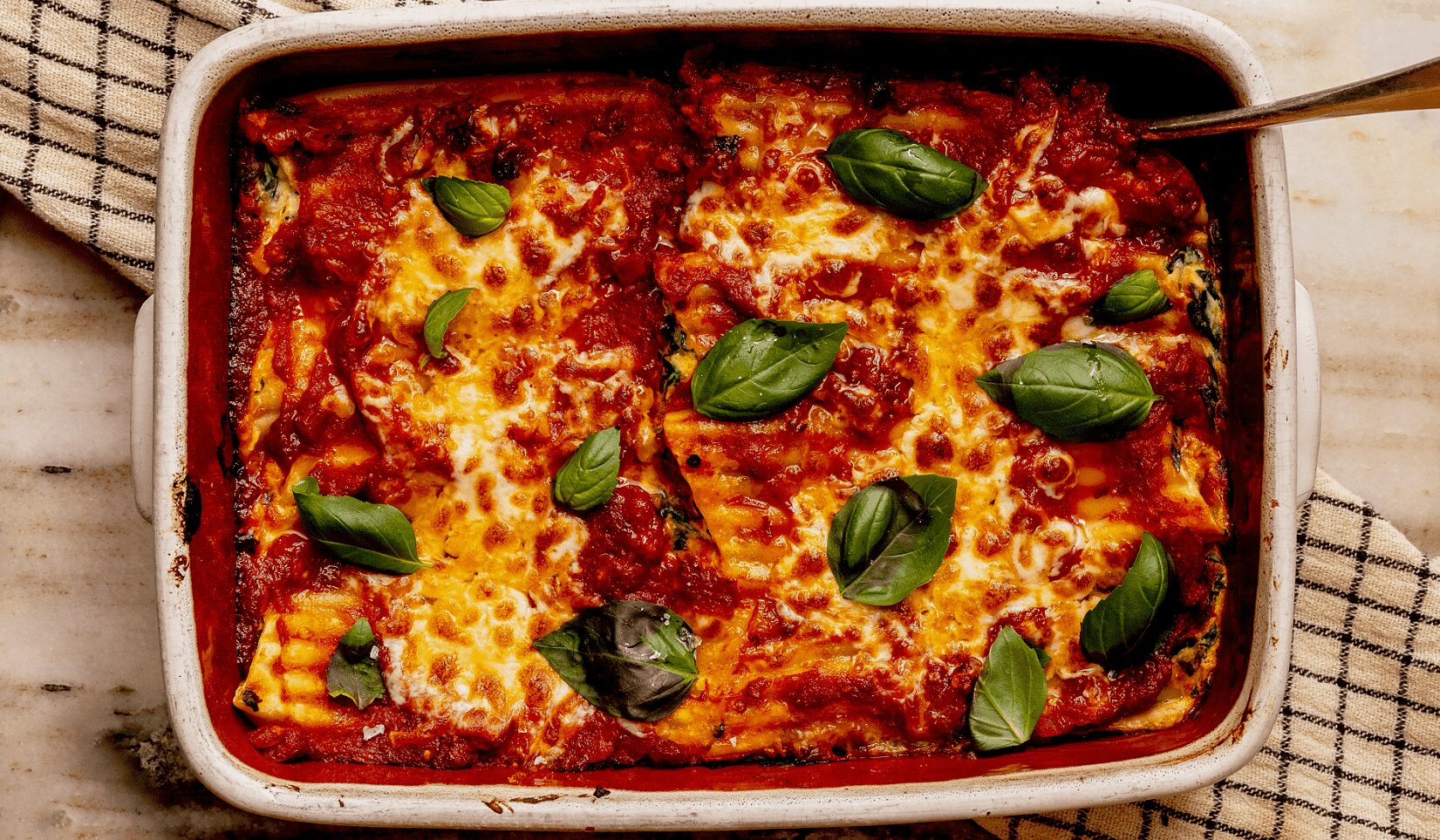 This spinach and cheese manicotti recipe is the pinnacle of comfort. If you’re ready to learn how to make vegetarian manicotti, this post will give you everything you need to know! You’ll learn if you can make manicotti without boiling the noodles, how to stuff the manicotti without losing your mind, and the difference between cannelloni and manicotti.

If there’s one thing I love, it’s pasta. And what better way to treat pasta than to stuff it with a rich ricotta filling and bake it in a spicy tomato sauce?

Now, if you’d asked me how I felt about manicotti while I was deep in the throes of stuffing them, I would have told you that I cursed Vincenzo Corrado and his idea to stuff long tubes of pasta. But when you eat it, the work somehow seems trivial because the finished product is oh-so-worth-it. Even my dad told me he usually sticks to stuffed shells because he simply doesn’t have the patience for stuffing manicotti.

I do have a few tips for you that I learned from other folks, which you can read below. But, we’ll start with the general recipe and history first.

What’s the history of manicotti anyway?

If you’ve heard of cannelloni before and you look at manicotti, you may wonder what the difference between is between cannelloni and manicotti. They’re both tubes, they’re both stuffed with cheese, and they’re both cooked in sauce.

The first difference? The name. Cannelloni is the original, Italian dish while it is often called manicotti in the United States. The other difference is in the pasta itself. Cannelloni is a bit thinner and smooth while manicotti is thicker and typically has ridges. The ends also tend to be angled while cannelloni is flat.

Both manicotti or cannelloni can be stuffed with meat (Bolognese sauce or a ragu) or a ricotta spinach filling as I did. The sauce can be a tomato-based sauce, a béchamel, or a mix of the two.

How to make this vegetarian manicotti recipe:

The most important part of the manicotti is the sauce and the filling. This recipe uses a sauce that I’ve used for pizza before. It’s jammy, a little sweet, and spicy. You’ll need:

The sweet, spiciness of the sauce pairs perfectly with the filling for the manicotti. The filling is quite simple, you’ll need:

Do not skip the lemon juice! It adds just a nice nip of brightness to the filling.

This vegetarian manicotti recipe uses fresh spinach which is sautéed first and then chopped. You can use frozen, thawed spinach. Whether you use fresh or frozen, be sure to squeeze out as much water as possible before chopping it up.

Like lasagna, manicotti can be made ahead of time! You can assumble the manicotti the night before and refrigerate over night to make for dinner the next night. Alternatively, you can assemble it, wrap it tightly with foil, and freeze for up to two months.

Can you make manicotti without boiling the noodles?

In short, yes! The only challenge is that you will need to bake the casserole for closer to 1 hour instead of 30 minutes. Below are my timing recommendations based on the boiling time of the pasta: 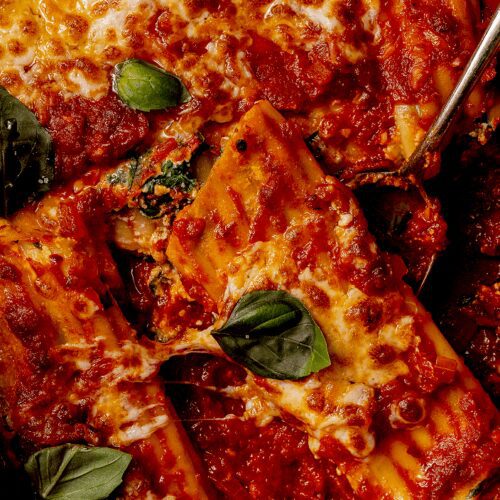 The pinnacle of comfort, this manicotti is stuffed with a rich ricotta and mozzarella filling and plenty of spinach.
5 from 2 votes
Print Pin
Servings: 14 manicotti
Calories: 265kcal

*Note: If using frozen, thawed spinach, skip sautéing and freezing the spinach. Simply chop it up and continue with the recipe as-is.