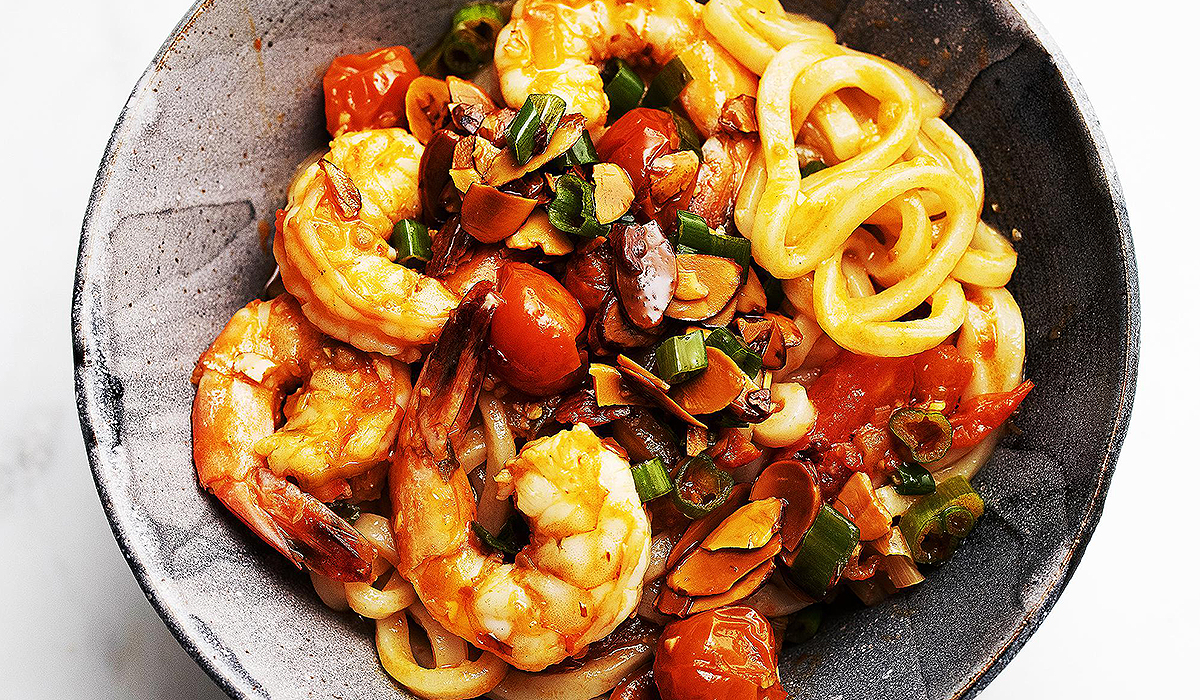 This spicy tomato udon with shrimp is the jammy, spicy, and all around delicious Asian recipe with tomatoes that you will love.

Before we talk about this incredible spicy tomato udon with shrimp, let’s take a little walk through history and talk about the tomato.

Many people associate tomatoes with Italian food. Of course, it makes sense if not for the nuanced variety of tomato sauces throughout Italy. The reality is that tomatoes didn’t arrive in Italy until 1548 after they were taken from the Aztecs by the Spanish conquistador Hernan Cortes. Previous to that, tomatoes were grown in regions of the New World including Ecuador, Chile, and Peru. It took a few hundred years for Italians to even warm up to the ingredient. But once they did, the world of tomato-centric Italian food was born.

Interestingly enough, tomatoes had a similar trajectory in China. They arrived sometime around the 16th or 17th century and the reception was similar. There was a touch of confusion but people were still curious. Tomatoes never caught on as a universal ingredient as they did in Italy, but they still play an important role in certain Chinese cuisines. For westerners who may wonder whether there are an abundance of Asian recipes with tomatoes, the answer is YES, at least in China. Try Chinese stir-fried tomato and eggs or Tomato beef noodle soup.

While I won’t touch on every single Asian country, Japan is interesting. Tomatoes were brought to Japan by Dutch and Portuguese sailors who brought the fruit with them from China and Southeast Asia. From 1600 to early 1900, tomatoes were mainly used as ornamental fruits. Throughout the 1900s, the popularity of the tomato transformed. It was prepared as a salad or side dish and ketchup grew in popularity.

How to Make this Udon with Tomatoes:

Tomatoes are certainly not an integral part of Japanese cuisine, but a simple tomato salad with soy vinaigrette is a very popular dish in Japan. All that to say, while tomatoes in many Japanese or Chinese dishes may be lesser known to western palates, it works incredibly well with a sesame-soy flavor profile. Which takes us to…the recipe!

This spicy tomato udon with shrimp leverages the tomato’s jammy sweetness and pairs it against a spicy, sesame-soy based sauce. We load it with garlic and Thai chili peppers and finish the dish with a chili-oil soaked almond garnish.

Make this recipe and watch your whole family thank you graciously. It’s that good and it’s that easy to make.

First, prepare the tomato sauce. Simply sauté tomatoes and onion and softened and beginning to char. Add butter and then add minced chili peppers, garlic, and scallion whites. Add soy sauce, sesame oil, and a touch of fish sauce and sugar. Throw in some chicken stock and bring to a boil. Let the sauce simmer vigorously for about 30-40 minutes until thickened and reduced.

While the sauce cooks, prepare the chili oil almonds. All you need is 3/4 cup chili oil and 1 cup blanched, thinly sliced almonds. Combine them on the stove top and let them bubble away on low heat for about 20 minutes until the almonds are golden brown. Turn off the heat and set aside.

Next, cook the noodles. Drain, rinse, and set aside. Lastly, throw the shrimp in the sauce and let them cook until just cooked through. Toss in the noodles and turn off the heat. Garnish with that delicious crispy spicy almond garnish and you’re ready to be in heaven.

This spicy tomato udon with shrimp is the jammy, spicy, and all around delicious Asian recipe with tomatoes that you will love.
5 from 1 vote
Print Pin
Prep Time: 10 minutes
Cook Time: 40 minutes
Total Time: 50 minutes
Servings: 4
Calories: 424kcal